Already in production and set to premiere on Viu in a few months, the fictional series follows the story of four college students who explore the mysterious Wadi Al-Jinn caves and find themselves in a hidden underworld dominated by evil forces.

Behind the lens, Egyptian Hossam El Gohary will direct the series, bringing his artistic and dramatic adaptation to Viu-ers’ screens, alongside Producer Ramez Atef, Art Director Hind Haidar and Costume Designer Enas Abdullah. Director of Photography Ashraf Gaber is tasked with bringing the mystery of Wadi Al-Jinn to life through dazzling visuals with the support of one of Egypt’s top visual effects studios, TREND VFX.

The lineup reaffirms Viu’s commitment to fostering and growing local Arab talent through compelling original content that is built for modern, local audiences.

Director Hossam El Gohary said, “This is another special script from the Viu Original team, with another special cast to bring it to life. My team and I have amazing talent at our disposal and are thrilled to be on location in such a beautiful and historic part of the eastern Egyptian desert. This is an incredibly interesting topic and concept, and we look forward to cinematically mystifying the story for the screen.”

Mr Wessam Kattan, Vice President of Content of Viu Middle East, said, “This series underlines our passion for investing in upcoming Arab talent, and creating must-see, absorbing content for our audiences, across diverse genres and offered in myriad languages. Our Viu Original team has brilliantly crafted a unique and imaginative modern plot, informed by audience data insights and based on Arabic mythical stories. We look forward to seeing Wadi Al-Jinn air exclusively to Viu-ers early next year, as we continue delivering on our promise of bringing the very best original Arabic entertainment to the market.”

Viu is a leading pan-regional over-the-top (OTT) video streaming service operated by PCCW media group. It is available in 16 markets including Egypt, Bahrain, Jordan, Kuwait, Oman, Qatar, Saudi Arabia and the UAE in the Middle East; as well as South Africa; Hong Kong, Singapore, Malaysia, Indonesia, the Philippines, Thailand and Myanmar in Asia.

Operating with both an ad-supported tier and a premium subscription tier, Viu delivers premium content in different genres from top content providers with local languages and subtitles, as well as original production series under the “Viu Original” initiative.

Viu offers users popular and current content with streaming and download features and localized user interfaces. With the patented Dynamic Adaptive Transcoding technology, Viu can provide the best viewing experience regardless of device or network conditions.

The service can be accessed via Viu app (available for free on App Store and Google Play) on connected devices, e.g. smartphones and tablets, selected smart TVs, as well as on web by logging into www.viu.com.

Run by Ahmed Fahmy as Managing Director, iProductions aims to be a truly integrated content company that develops, produces and distributes high-quality content, catering to the Egyptian and the Pan-Arab market. The company also strives to produce entertainment TV shows and all sorts of content.

PCCW media group also provides a leading pan-regional OTT video service under the Viu brand with over 35 million users in 16 markets including countries in Southeast Asia and the Middle East, as well as South Africa. The Viu service is available to consumers through a dual model with an ad-supported free tier and a premium subscription tier. Viu offers fresh premium TV series, movies and lifestyle programming in local and regional languages and subtitles in different genres from top content providers, as well as premium original productions under the brand “Viu Original”. The service can be accessed via the app, selected smart TVs and online.

PCCW Limited (SEHK: 0008) is a global company headquartered in Hong Kong which holds interests in telecommunications, media, IT solutions, property development and investment, and other businesses.

PCCW also owns a fully integrated multimedia and entertainment group in Hong Kong. It operates the largest local pay-TV operation, Now TV, and is engaged in the provision of over-the-top (OTT) video service under the Viu brand in Hong Kong and other places in the region. 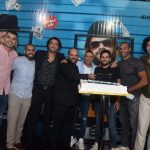