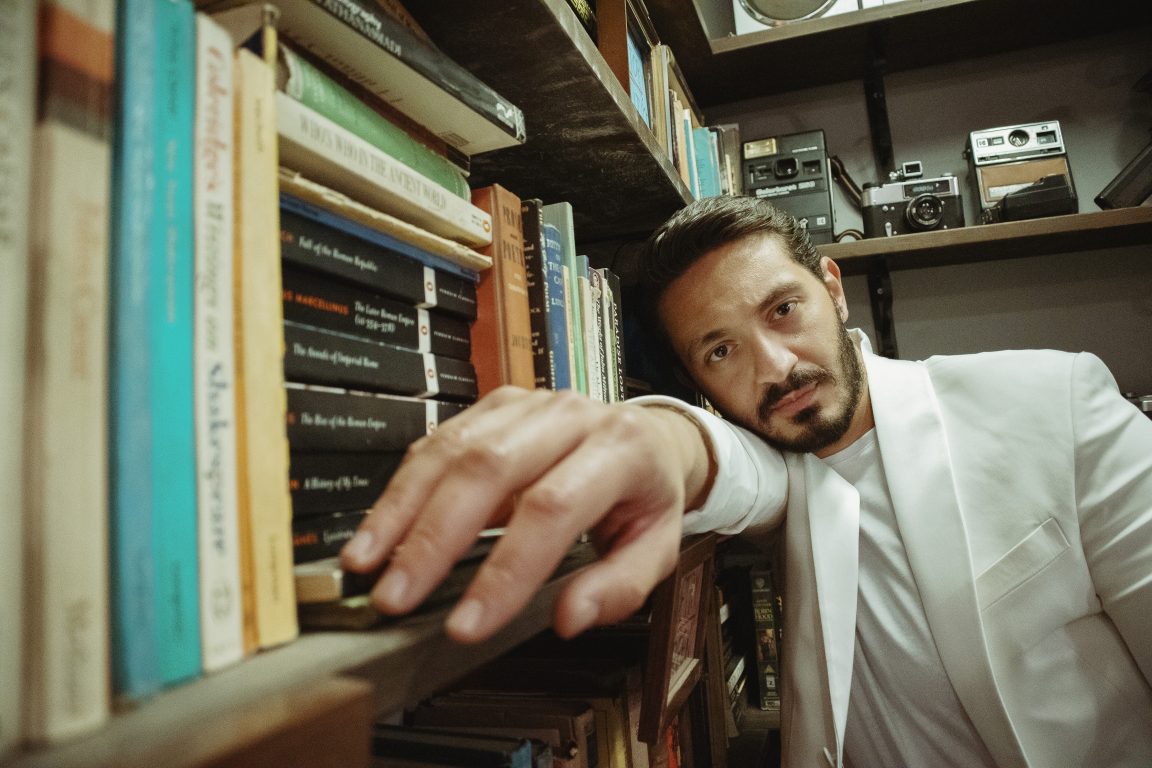 “It’s been a long journey, and through it, I learned the meaning of “Learn from making mistakes.”

As a perfectionist, I thought I don’t want to make mistakes and just nail everything I do. But by time, I learned to understand why I achieved what I did and not focus on just the outcome.”

Making a name for yourself as an actor is hard as it is, but making a name when your name is already known can be challenging.

27-Year-old Youssef Othman made his acting at just 6 years old, in the now-classic, Baheb el Cima alongside the legendary actor Mahmoud Hemeda and Laila Elewi.

Othman stole the movie with his acting and sense of humour.

Now 21 years later, with 35 work under his belt, Othman managed to stay sane after becoming a major child actor, but he also rebranded himself as an actor and a public figure.

“When I started acting, I was very young. I remember a scene we shot in the movie in Shoubra, and we had a rain machine. Naturally, everyone was watching what’s happening, and afterwards, people started taking pictures with me. I was confused as to why anyone would want a picture with me, or even an actor in general.

Nevertheless, I was on cloud 9.

I was a kid; of course, I loved the attention. It was an ecstatic feeling that I couldn’t describe.

As soon as I started getting this attention, my mother did something that, I believe, changed my perception about the whole concept of fame.

My mother told me that this is not who I am and that none of this should define my self-worth.”

Youssef took a short break from acting as a teenager to focus on his studies. He wasn’t bothered that people started not to recognise him or that he didn’t get as much attention as he used to.

“I became more comfortable with my fame slightly fading. Even when I decided to go back to acting, it wasn’t because I became obsessed with this attention, but rather because I wanted to act.”

While his family supported his acting, and he credits his mother for keeping him grounded as a youngster when he was dealing with the fame and attention he got, he told us they still wanted him to study something else other than acting.

Othman started studying Integrated Marketing Communication (IMC) at the American University in Cairo and Film & Theatre as a minor study.

“I learned to do everything myself while studying, from writing, directing, shooting and editing. I became a one-man show, if you will when it comes to making content.”

And that’s what led to something that we’ve never seen happen in Egypt before; a young and handsome aspiring actor who, instead of using the fame he already has to make a mainstream comeback, he chose to take it to Youtube…

…to talk about sports.

Youssef became one of the most prominent YouTubers in the Middle East and was even picked by CAF to cover the tournament’s events in 2019.

“I started making YouTube videos in 2016 without really thinking about the consequences. I thought, hey, I like football, I make videos, let’s see what happens!

Just shortly after, I understood the difference between becoming an actor and a Youtube presenter.

Youssef started taking YouTube seriously at a time when no one really did in Egypt. There was basically no “know-how” for the field.

This forced me to learn more about doing my own videography and editing as well. Editing is not just about cutting footage, but it has its own personality.

Through this YouTube journey, I started having common people in both fan bases; as an actor and as a YouTuber.”

While his whole YouTube career almost happened by chance, it was the changing point for Othman. Through it, he managed to break the curse of being known as the child actor.

“I didn’t want to be like Daniel Radcliffe, for instance, when his first movie after Harry Potter, his first leading role was still almost the same as Harry Potter.

I wanted to break the mould and take what might have been a longer route, but a more respectable way.”

Youssef Othman has his new show Wadi Al-Jinn screening on Viu and a short movie, 600 Kilometers, which will be competing in Luxor Film Festival.

Stay tuned for part two of our interview with Youssef Othman, where we will be talking about both roles, as well as his future projects.

P.S: there will be spoilers, so make sure you watch episode 1 and 2 before reading part two when we publish it!