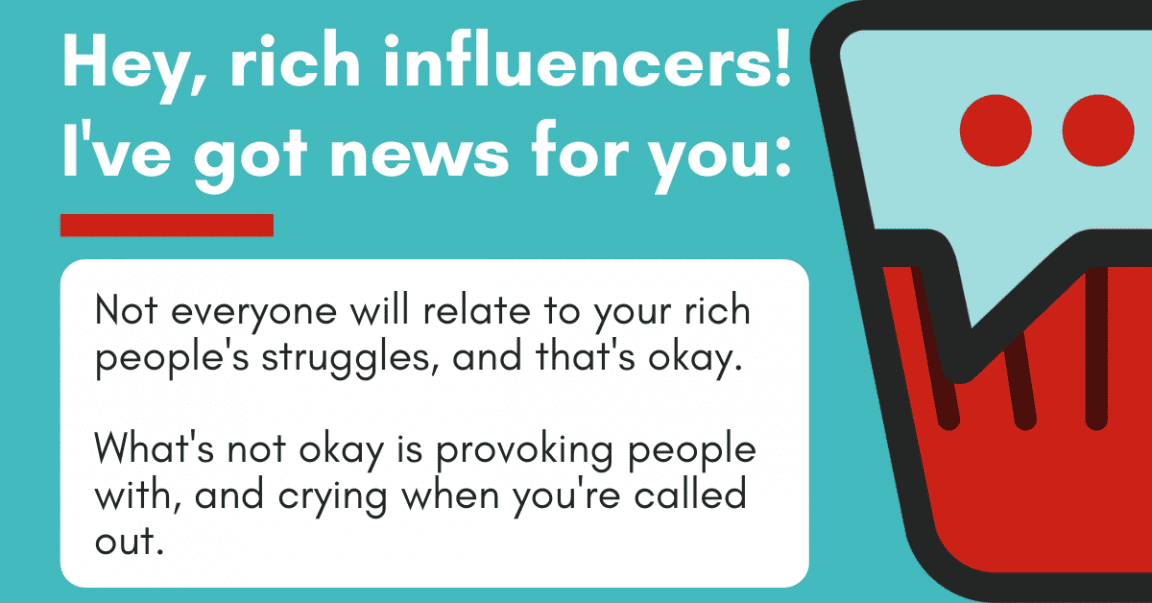 Disclaimer: We are not attacking anyone here, and we most certainly are against the bullying anyone is receiving. We ask all our readers to refrain from commenting on anyone’s posts, and if we find any of our followers bullying anyone, no matter who, we will block them. So with that out of the way, let’s get to the point.

So there’s this certain influencer who has been causing a bit of controversy for a few years now. Not a year or two, but for as long as I can personally remember, it’s been since at least 2017.

The controversy is usually her provoking her two million+ followers, receiving backlash, then making a follow-up video of herself crying and complaining about the bullying she receives. Then, a few weeks after, she’d make another provocative video, receives backlash, cry again, and the cycle just goes on and on.

Some of the provocative things I can remember over the years included:

1) Claiming Dubai is the only place where an “entrepreneur” can feel like they made it.

2) Bragging about a French-Egyptian fiance, as if fully Egyptian men are faulty.

3) Multiple tone-deft “motivational videos” to her mostly younger audience about how rich she’s become and being self-made. (If you don’t see the issue with this point, we’ll get into details later)

4) A whole series bragging about buying a watch worth millions.

5) And finally, the most recent controversy is making yet another motivational video with her mother about their “low point in life” where her mother had to go from driving a Jeep Cherokee to Toyota Yaris. Before we get into that, it’s important to note that Toyota Yaris is the dream car for most Egyptians.

6) And my personal favorite, having a conversation with a convicted rapist to see his point of view.

Now let us discuss why people are calling her out, leading to some bullying in the process.

The normalization of being rich:

Many might argue that she’s allowed to share these things on her socials, and she’s allowed to be proud of her purchases, and I 100% agree. The issue is normalizing being rich to her young audience.

According to her, owning a Toyota Yaris is a downgrade. This might be the case for her, and I understand that this was a struggle for her and her family, and she’s allowed to feel bad about it, BUT it’s very tone deft to go out to millions of followers and complain that this was her struggle.

Most people are struggling financially in general, especially after the pandemic. Most of her followers are young girls, who I’m sure their families can’t even afford a Yaris. She made it seem like their lives are worthless, even though she thinks she’s making a motivational video.

Work hard till you get rich is a lie she keeps overusing:

Going back to her previous motivational video about working hard enough till she bought a super expensive watch and ending it with “work hard enough till you can afford to buy your dream watch” is just another detached from reality video.

Most people and their whole families would work their butts off, and they still couldn’t afford half the price of that watch.

The whole hustle till you’re filthy culture she’s promoting is unrealistic and needs to end. She’s not self-made, and she is extremely privileged, and she should just accept that and stop trying to be relatable because the 1% you relate to isn’t even following you!

She’s exactly like how Kylie Jenner came out as a self-made billionaire when she already came from a family of millionaires.

She’s from a family whose “down” phase in life was still affording a Yaris. You DO come from a rich and privileged family, and saying otherwise is lying.

You’re lying to young girls who are too naive to know better. And when they never reach this point in life, they will feel like they are what’s wrong, not YOU!

You’re “Ups and downs” motivational speech was not really a down:

The girl made a video crying about the backlash she received about the Yaris video and defended herself, saying that she was sharing something personal that no one knew about. Not even people at her school.

This means that your “down” didn’t lead you to leave your school or look by any means less than you already were, socially. Girl, this isn’t a family financial crisis. I can make a whole article about this, but maybe go watch the film “El Beh el bawab” or something to see how families can really struggle financially and go from one social status to the other.

Good intentions can sometimes be offensive, and she needs to deal with it:

Remember when the whole world attacked Gal Gaddot and the celebrities in her Imagine video during the pandemic? The world was offended by these millionaires staying at their mansions singing a song, thinking it would make everything better when everyone was dying or losing their jobs.

Did they intend for it to be offensive? No. Did they have good intentions while doing it? Absolutely. Did they end up offending people? Yes, and most of the people in the video apologized for it.

This leads me to the next point…

And that’s okay. They don’t need to, and that’s the issue with the said influencer.

She is trying so hard to relate to the average person, and she just keeps offending people time and time again.

There are hundreds, maybe even thousands, of influencers who are rich and people love and never cause public scandals. They are aware of their privilege enjoy it publicly but never try to motivate anyone to do anything.

Now going to the main issue with this person.

People calling you out is not always “bullying,” and you need to start owning up to your actions:

Not a single time has she apologized for her actions. Not even when she wanted to talk with a rapist who raped multiple underaged girls.

She is always crying after the backlash and only looks at the bullying she receives, which, again, we are 100% against, but never looks at the constructive criticisms she received.

You are offending people. Thousands of people. Maybe take a break and think of why they are offended and don’t do it again?

You’re not being called out because of some conspiracy theory in your head that everyone is jealous and wants to hurt you.

You just keep making the same mistakes over and over, and people are just done with it.

We understand how exhausting it is to keep getting attacked left and right, and I honestly feel for you. But you need to stop provoking people. You are in the wrong, and you need to own up.

If you just stopped trying to be relatable and motivate people, the whole thing would end.

You’re not relatable, and your motivation is just insulting to the average person and unrealistic.

Go back to making content about fashion. You don’t need to motivate anyone because nothing is motivating about you, and you know what? That’s okay!

We understand what we’re saying might sound harsh, but at this point, a reality check is needed for her and people blindly defending her.

We hate the bullying she’s receiving; we really do. No one deserves it. And we understand that people might think we are bullying her as well, but we are only holding her accountable because someone needs to call her out.

Being a victim of bullying doesn’t make her right.

Stop setting unrealistic expectations for your young followers, and stop provoking your average follower with your wealth.

Enjoy being rich, and we’ll be happy for you. Just don’t try to motivate me or relate to me because you never will.