Moroccan singer Saad Lamjarred is set to return to the Court of Appeal in Paris for the alleged rape of a French woman, Laura Prioul.

The decision to re-open the case comes months after the court ruled that Lamjarred should appear before the criminal court for his alleged involvement in the rape of Prioul, who accused him of raping her.

The rapist faced a huge backlash from Egyptians last year when he was invited to perform a concert amidst the Egyptian #Metoo movement.

Lamjarred, however, was sadly supported by numerous celebrities who shamelessly supported a rapist. 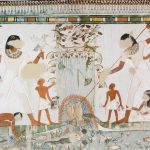