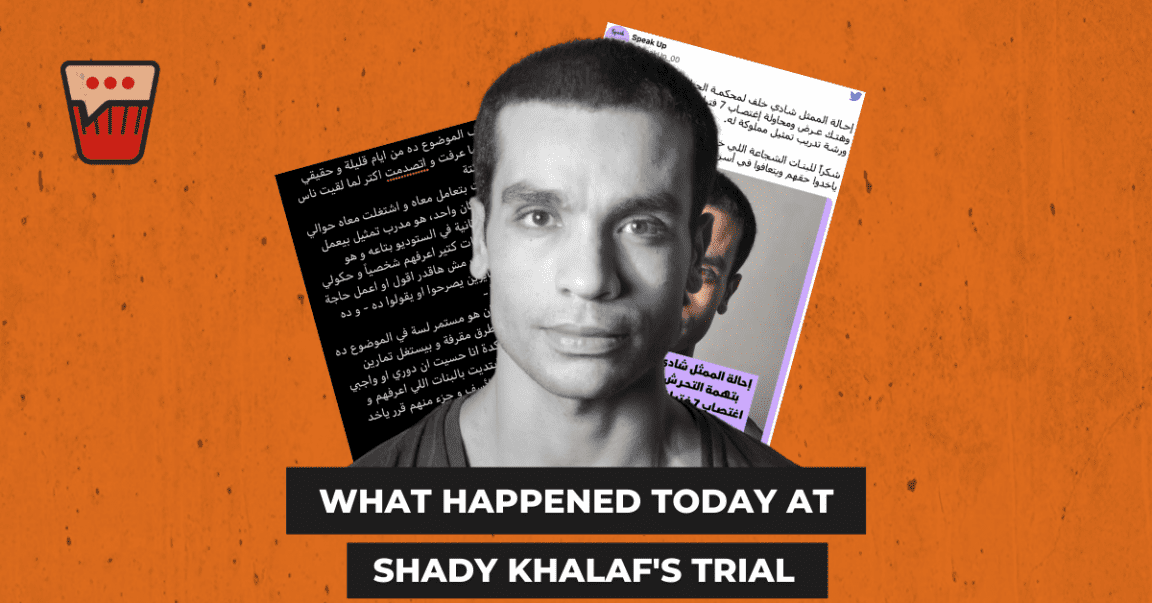 Update 22/2/2022: The Cairo Criminal Court In Abbaseya, sentenced Shady Khalaf to 3 years for sexual harassment and assaulting 7 girls inside an acting workshop.

On 13 November 2021, the Public Prosecution in Egypt referred Shady Khalaf to a criminal trial on charges of sexual harassment and sexually assaulting 7 girls during an acting workshop in his studio. His trial is postponed.

What happened, and what is expected to happen? Let’s discuss.

It all started last June when actor and standup comedian Abdul Rahman Magdy posted on his Instagram account that he heard about women who were harassed by an acting coach inside his studio during acting workshops.

Magdy did not mention the actor’s name or the victims at that moment but said that he seeks to warn the girls who are communicating with him and stop the coach from his actions.

In October 2021, he was first referred to the Criminal Court after the Public Prosecution charged him with harassment and sexually 7 girls during an acting workshop in his studio.

The Cairo Criminal Court postponed the first session of Shady Khalaf’s trial, accusing him of harassment, sexually assaulting, and attempting to rape 7 girls by force against their will, inside an acting workshop, to the following December 19 session for pleadings.

The Cairo Criminal Court heard the statements of Shady Khalaf and faced him with the accusations against him, which he denied.

During the trial session, the lawyer of Shady Khalaf requested to call the evidence witnesses to the court and hear their statements. The second victim to ask her and hear her statements.

According to Cairo24, Shady Khalaf’s lawyer questioned the victim’s motives for taking the case to court after years of it happening. He also claimed that the case was made for the “trend.”

It is reasonable that someone would harass someone in 2016 and she continues to work with him till 2020, after which she files a complaint against him?

The Law in Egypt

The law states that:

Article 306 (A): Whoever exposes others in a public, private, or public place by committing sexual or pornographic insinuations or insinuations, whether by gesture, verbal or deed, by any means, including wired, wireless, or electronic communications, or any other means.

The penalty shall be imprisonment for no less than three years and not exceeding five years and a fine of no less than 200000 EGP and not more than 300000 EGP, or either of these two penalties if the act is repeated by the offender through stalking and tracking the victim.

In the event of recurrence, the minimum and maximum penalties of imprisonment and a fine are doubled.

Article 306 (b): It is considered sexual harassment if the crime mentioned in Article 306 (a) of this law is committed with the intention of the offender obtaining from the victim a benefit of a sexual nature, and the offender shall be punished with imprisonment for no less than five years.

Those mentioned in the second paragraph of Article 267 of this law, or who had an occupational, family, or educational authority over the victim, or who exerted any pressure on him that circumstances allow him to harass against the victim, or the crime was done by two or more persons, or at least one of them was carrying a weapon, the penalty is imprisonment for no less than 7 years.

It’s worth mentioning that Shady is the son of renowned poet Nabil Khalaf, who was previously sentenced to 7 years in financial corruption cases.

Social media and awareness campaigns played a big role in encouraging women to finally break the silence regarding their abuse.

Egypt has recently witnessed a significant change in the number of women who report that they have been exposed to harassment and take action against those harassers. 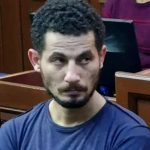 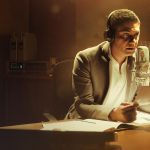